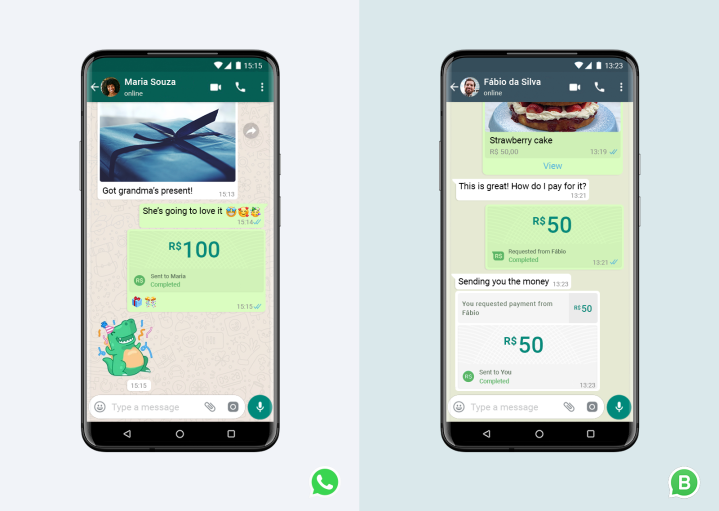 WhatsApp on Monday 15 June, launched its digital payments service in Brazil which it announced via a blog post and Twitter account, including a one-minute YouTube tutorial on: How to send money on WhatsApp (Brazil).

WhatsApp users in Brazil can now send money to friends and family or pay a business right from your chat 💸💸💸 pic.twitter.com/BwrcCq9CJW

“We’re excited to announce that starting today we’re bringing digital payments to WhatsApp users in Brazil. People will be able to send money securely or make a purchase from a local business without leaving their chat”.

“In addition, we’re making sending money to loved ones as easy as sending a message, which could not be more important as people are physically distant from one another”.

This comes at zero commission fees when sending money or making a purchase, however businesses will pay a processing fee to receive customer payments, similar to what they may already pay when accepting a credit card transaction.

The payment which will be enabled by Facebook Pay, is with a future plan for people and businesses to use the same card information across Facebook’s family of apps (Facebook, Facebook Messenger, Instagram and WhatsApp).

“We have built payments with security in mind and a special six digit PIN or fingerprint will be required to prevent unauthorized transactions. To start, we will support debit or credit cards from Banco do Brasil, Nubank, and Sicredi on the Visa and Mastercard networks -and we are working with Cielo, the leading payments processor in Brazil. We have built an open model to welcome more partners in the future”.

Although there’s no confirmation yet on the specific roll out plan to other countries and how soon, TechCrunch reported in February of 2018, about WhatsApp’s Beta testing in India with hopes of it becoming more widely available in the country after the best testing phase had been completed. WhatsApp’s closing statement in the blog post however reads:

“Payments on WhatsApp are beginning to roll out to people across Brazil beginning today and we look forward to bringing it to everyone as we go forward”.

On a much blithe note, the huddle some users would experience is the drive of requests hinged on the ease through which payments can be made using the messaging platform.

As some replies following the tweet announcement, predict a possible surge in bailout requests while chatting; hence reducing the chances of pandering to the played out excuse of having to leave the ‘business of chatting’ “…without leaving their chat” stated in the announcement, to make payments. Whenever this is rolled out to more countries.

‘secretive WhatsApp users’ may have to factor this into their continued quest for a discreet online presence, which has in the past included: turning off read receipts and hiding their last seen in order to dissipate untimely barrage of messages as well as unsolicited voice and video calls that may accompany owning a WhatsApp account. As WhatsApp continues to bring just about everything to your app.

Did you miss the pun in the headline, here’s a now viral precedented video of a “miscommunication predicament” between WhatsApp (the messaging and voice over IP service) and Cash App (the mobile payment service), that now lends credence to the blithe note stated earlier.

Emerald is a Student of Pure Mathematics at the Federal University of Oye-ekiti. CEO & founder of iCASTE MEDIA. A writer & blogger, passionate about entrepreneurial crafts and loves to promote them too. View all posts by Emerald